This just in: Americans are getting more and more of their electricity from renewable sources.

Okay, so maybe that isn’t exactly “news” if you follow the sector, but it’s important to underline from time to time regardless. Last year, wind and solar combined to account for far more new U.S. generating capacity additions than any other resource, totaling 62% of all new capacity. Now a new report shows which utility holding companies are leading the way in renewable energy generation. The non-profit group Ceres’ new Benchmarking Utility Clean Energy Deployment: 2016, produced in partnership with Clean Edge and released on June 28, offers data on not only renewable generation, but also the amount of electricity saved through utility energy efficiency programs. And the gap between the leaders and the laggards on these measures is significant. 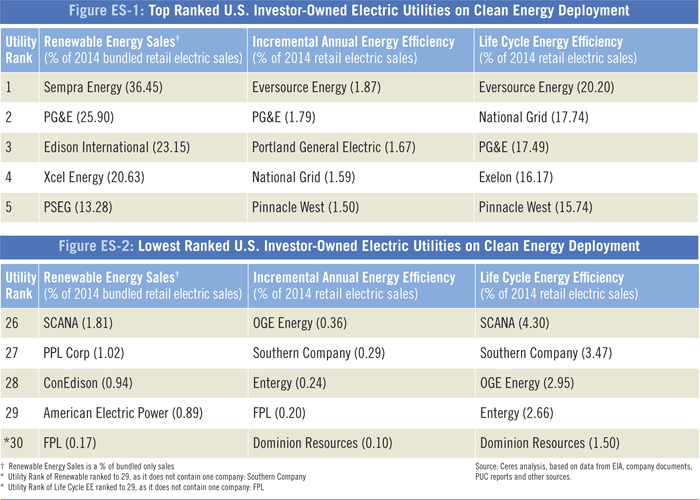 On the renewables front, Sempra Energy stands out as the runaway leader. It received more than 36% of retail electricity sales from renewable sources, up nearly 20 percentage points since the last report two years ago. Sempra is the parent of San Diego Gas & Electric, which services a city with a goal to reach 100% renewable energy. Sempra has more than 60 contracts for renewable energy, and in 2015 became the first of California’s utilities to supply its customers with 33% renewable energy. Four companies – Pacific Gas & Electric (PG&E), Edison International, Xcel Energy, and Berkshire Hathaway – each supplied more than 10 million megawatt hours (MWh) of renewable generation, together totaling nearly 70 million MWh, more than half of total renewable energy sales by all of the 30 utility companies tracked in the report.

California’s three largest IOUs top the renewables rankings: After Sempra, PG&E and Edison International (owner of Southern California Edison, or SoCalEd) come in second and third, respectively. That probably isn’t surprising: all three companies have invested heavily in utility-scale wind, solar, geothermal, and biomass generation. (Hydropower is not included in the Ceres analysis.) Additionally, SoCalEd has a warehouse rooftop solar program with a maximum capacity of 220 MW.

One reason for the Golden State’s success – in addition to dramatically falling clean-energy costs, federal regulations, and international agreements – is the high bar that state policymakers have set. Leading the way are mandates such as a strong renewable portfolio standard (RPS, which was 33% by 2020 in 2014 but has since been increased to 50% by 2030); an energy storage requirement (1.3 GW installed by 2020); requirements for utilities to plan for more distributed resources on the grid; and incentives such as the Self-Generation Incentive Program that doles out money for wind turbines, storage systems, and fuel cells, among other technologies.

Meanwhile, as the report notes, states in the Southeast have historically had weaker renewable policies in place. Perhaps it’s not a coincidence, then, that four of the five lowest-ranking companies in this indicator – SCANA, PPL, American Electric Power, and Florida Power & Light (FPL), along with the New York City area’s ConEdison – have service territories encompassing the South (as well as the Rust Belt). None of the bottom five gets more than 2% of its electricity from renewable sources.

The story is similar on the energy efficiency side of the equation. Eversource Energy leads on both efficiency indicators, bringing three other companies – PG&E, National Grid, and Pinnacle West (owner of Arizona Public Service) – with it to the top of each ranking. The only difference between the incremental and life-cycle lists has Portland General Electric joining the top five in the incremental annual efficiency indicator, while Exelon supplants it in life-cycle savings. Exelon deserves particular recognition: It boosted its incremental efficiency savings by half a percentage point over 2014’s report, and outpaces its closest competitor (PG&E) in total life-cycle savings by 10 million MWh

These companies generally serve states in three parts of the country: the West Coast (plus Arizona), the Mid-Atlantic, and New England. (Exelon also services Illinois.) One connection between these states? Most of them have energy efficiency resource standards (EERS) driving their efficiency goals. Four of these states – Arizona, Maryland, Massachusetts, and Rhode Island – have the strongest EERS in the nation, according to the American Council for an Energy-Efficient Economy’s (ACEEE) 2015 State Energy Efficiency Scorecard. The Northeast states receive an additional boost from their participation in the Regional Greenhouse Gas Initiative, which through 2013 had dedicated 62% of its proceeds to funding efficiency efforts.

Contrast that with the companies at the bottom of the efficiency rankings. OGE Energy, Southern Company, Entergy, FPL, and Dominion Resources constitute the bottom five in annual efficiency savings; the life-cycle savings bottom five is nearly identical, with SCANA replacing FPL. These utilities generally serve states in the southern part of the country, where EERS are less prevalent. Arkansas, North Carolina, and Texas are the only states with EERS policies among the states served by these five companies. And while it can be difficult to draw a straight line between specific policies and deployment numbers, it’s also hard to ignore evidence of a connection.

The report wraps up with a series of recommendations, many of which focus on data reporting and availability. The report notes that many of the 11 different types of sources that Ceres gathered data from (ranging from RPS reports to company websites) often had incomplete or out-of-date data. That’s a real problem when considering industry transparency and benchmarking accuracy, as is the fact that the best data on renewables and distributed energy resources is often not available for free. As the U.S. continues its transition to a clean-energy economy with large utilities necessarily playing a key role, we hope that the Ceres and Clean Edge report will provide some impetus for both industry and public data providers to shift to more standardized, timely data collection and reporting.

Andrew Rector is a market analyst for Clean Edge. He manages much of Clean Edge’s analytical work, including the annual production of the U.S. Clean Tech Leadership Index, the Grid Modernization Index, and custom analysis and reports.