The United States is experiencing a significant shift in its energy landscape. Last year, utility-scale wind and solar power combined for 47% of new generation capacity in the U.S. Based on this expansion, 11 states now generate more than 10% of their electricity from solar, wind, and geothermal power, with three of these states – Iowa, South Dakota, and Kansas – exceeding 20%. In 2014, California became the first state in the nation to garner 5% of its electricity from utility-scale solar. When including hydropower, four states – Idaho, Washington, Oregon, and South Dakota – now exceed 70% renewables generation.

Just released to the public, Clean Edge’s 2015 U.S. Clean Tech Leadership Index tracks and ranks the clean-tech activities of all 50 states and the 50 largest metro areas in the U.S. The Index highlights the dramatic shifts taking place by tracking a wide range of leadership indicators, from EV and renewables adoption to patent and investment activity.

Against this national backdrop, the top states and metro areas tracked by our 2015 Index are accelerating their clean-energy goals to levels once believed unthinkable. In California, the #1 state in the Index for six consecutive years, Governor Jerry Brown set a target of 50% generation from renewables by 2030 in his January 2015 State of the State address. The California cities of San Francisco, San Jose, and San Diego (along with much smaller cities like Burlington, Vt., Georgetown, Tex., and Greensburg, Kans.) have renewable energy goals of 100%. And lawmakers in Hawaii, a state that’s back in the top 10 in this year’s Index, made the biggest splash of all in May, establishing the nation’s first statewide 100% renewables target (by 2045). That audacious goal passed the two houses of Hawaii’s state legislature by a combined vote of 74-2 and was awaiting Governor David Ige’s expected signature as our latest Index report went to press; the Aloha State is currently at about 20% renewables.

Making these goals possible, in addition to the significant expansion of wind power over the past decade, is the recent surge in the growth of solar energy and energy storage. The U.S. added more than 6 GW of new solar capacity in 2014, a 30% growth rate. And breakthroughs in advanced batteries are poised to enable the mass adoption of distributed and intermittent renewables, while giving companies and individuals the opportunity to help ease strains on the grid during periods of high-energy demand.

State Leadership Spans East, West, and in Between

California leads all states in the Index by a wide margin for the sixth consecutive year. The rest of the top five states in last year’s Index – Massachusetts, Oregon, Colorado, and New York – repeated their respective rankings in our 2015 edition.

Places six through 10, however, showed some notable movement from last year. Fellow New England states Vermont and Connecticut each jumped three places to #6 and #7, respectively. Illinois held steady at #8 for the third straight year, but Washington fell two spots to ninth, its third consecutive yearly drop since ranking #4 in 2012. Hawaii moved up two places to rejoin the top 10. The Aloha State has climbed in the ranks significantly since ranking 19th back in 2010. The bottom five states in this year’s index are West Virginia, North Dakota, Alaska, Mississippi, and Nebraska. 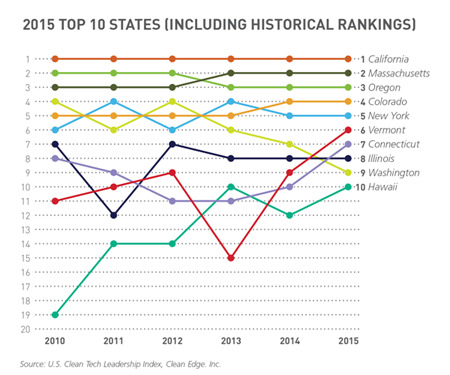 Metro Leadership Across the Nation, but South Lags

On the metro front, the San Francisco Bay Area remains the nexus of clean-tech leadership in the U.S. The San Francisco metro area is #1 in the Index for the third straight year with southern neighbor San Jose in second place. San Francisco’s nearly 15-point lead a year ago shrunk to about six points, with an overall score of 86.5 to San Jose’s 80.6. But both remained well ahead of #3 Portland at 59.7. 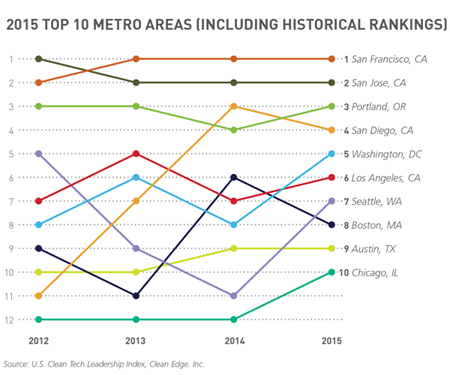 The transition to a clean tech and energy efficiency-based economy, based on the many indicators we track, is well underway. As highlighted above, solar and wind power, along with natural gas, are now the mainstream choices for meeting the nation’s electricity needs; coal-fired and nuclear power, the dominant choices of the 20th century, have become the marginalized “alternatives.” Similarly, energy-efficient appliances, LED light bulbs, green buildings, and hybrid and electric vehicles are expanding as conventional offerings, in most cases, fall further behind.

Regional governments, at the state and metro level, are setting a range of targets as we increasingly transition to a low-carbon economy. The goal of 50%, 80%, or 100% renewables will not be easy and will require innovation across the clean-tech value chain – in technology, policy, and capital. By indexing the activities of states and metro regions, we can track overall progress, and learn from both emerging best practices and unforeseen mistakes.

Information contained in this article is not intended to be investment advice or used as a guide to investing.