2022 was a volatile and difficult year, punctuated by high commodity prices, massive supply disruptions, and continued lockdowns in China. But the coup de grace, as governments, companies, and individuals worked to recover from the Covid-19 pandemic, was Russia’s invasion of Ukraine. This destructive and unjustified act left the European continent and world on edge and roiled oil, gas, and food markets from London to Lagos. It was a trying year by all accounts.

From an energy perspective, an overarching question is whether Russia’s war on Ukraine will speed or slow the energy transition. In the short term, the fossil fuel sector saw a surge in demand, and a significant increase in commodity and end-product pricing, as European countries scrambled to find alternatives to Russian natural gas (see stock index performance comparisons below). But based on a range of factors, we see the energy transition speeding up, not slowing down. Because of key factors like low-cost renewables (solar and wind are the most cost-competitive forms of new electricity capacity additions in most geographies) and supportive energy and climate policies such as the U.S.’s Inflation Reduction Act (IRA), we don’t foresee a repeat of past fossil fuel resurgences in the face of volatility and uncertainty. Instead, Putin’s petro-dictator muscle flexing is almost certain to backfire, as a host of nations, from China and India to the U.S. and Europe, work to embolden their clean-tech capacities and aggressively scale up clean-energy manufacturing and deployment.

Against this backdrop, IXE (Energy Select which benchmarks oil and gas) continued to outperform, up 64.56% for the full year on a total return basis. CELS (U.S. clean energy) declined 30.15% during the period, its largest annual decline in more than a decade. For the year, GWE (global wind) was down 12.79%, infrastructure-focused QGRD (global smart grid & grid infrastructure) declined 13.34% and HHO (U.S. water) was down 15.17%, all beating out the S&P 500 decline of 18.11%.

The energy sector has long been a core barometer of industrial activity and an important area for investors to track, but the sector and its related indexes, as historically defined, have contained mostly fossil fuel companies. Based on this narrow definition of energy, it’s important to compare both traditional energy and emerging energy transition players. While conventional energy indexes have provided outsized returns over the past two years, renewable energy has dramatically outperformed traditional energy over the past decade. During the last 10 years, IXETR (the Energy Select Sector Total Return Index of S&P 500 companies involved in the development or production of energy products – namely oil and gas) has grown 79.6% on a total return basis. Compare this to CEXX, the Nasdaq Clean Edge Green Energy Index, which increased 436.1% on a total return basis over the same time frame. 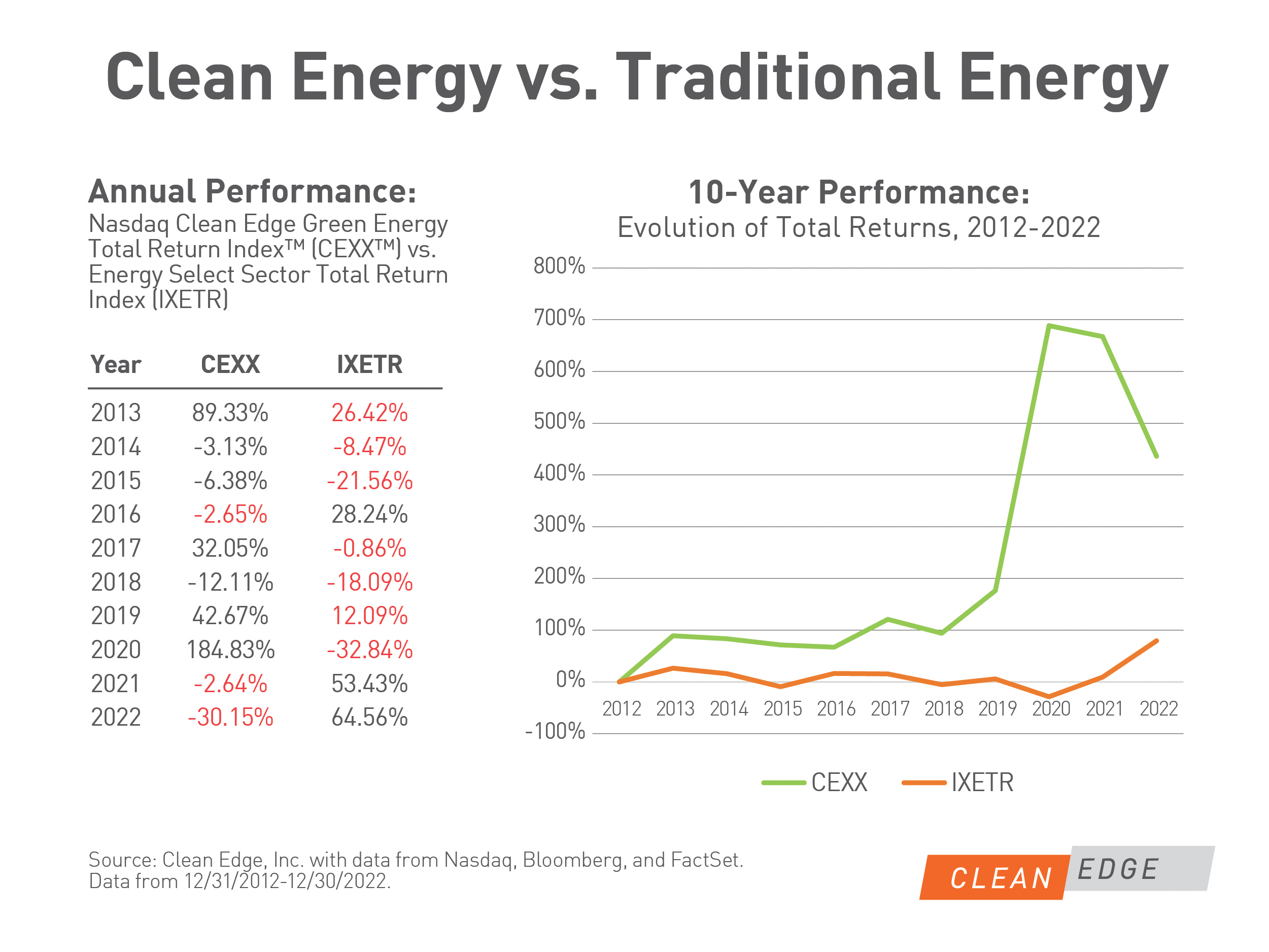 Renewable energy’s market performance is good news for both investors and the global energy transition. However, this transition will be bumpy – for example, both 2021 and 2022 saw losses in the renewable energy market due to headwinds including Covid-related supply chain disruptions, higher interest rates, and geopolitical instability. Despite the recent two years of losses, CEXX has outperformed IXETR for seven of the last 10 years. More broadly, the clean-energy sector has outperformed 10 of the 11 stock market sectors (as classified by GICS, the Global Industry Classification Standard) over the past decade, including Healthcare (+306.3%), Financials (+215.1%) and Industrials (+209.0%). It has produced returns comparable to Information Technology (+438.0%), the best-performing sector.

Below is a list of the top 10 best and worst constituent performers across the following Clean Edge Nasdaq indexes (CELS, QGRD, HHO, and GWE) during 2022.

QUARTERLY INSIGHT: TRENDS TO WATCH IN 2023

Looking ahead, what will 2023 bring? Below are some of the top trends we expect to see in the year ahead: