2020 proved to be a banner year for thematic clean-energy and broader clean-tech indexes. A combination of factors is at play, including improving economics (solar and wind power are now among the most cost competitive sources of new electricity capacity additions in the U.S. and abroad); record-breaking growth of multiple clean-energy sectors during the global COVID-19 pandemic (shining a light on the resilience of wind and solar markets, in particular); and the expansion of green stimulus plans across Europe, Asia, and the U.S. (with the election win of Joe Biden being the proverbial feather in the cap).

One of the big shifts mentioned above is the dramatically changing economic landscape as clean-energy sources such as solar and wind expand due to increasingly competitive pricing and rising demand for zero-carbon forms of energy. While market caps are not directly correlated to such economic and societal shifts, they do provide a layer of insight into which sectors the market is favoring. For example, in the bubble chart below, we compare the market caps of Clean Energy Leaders such as Tesla, NextEra, Ørsted, Vestas, and Iberdrola against traditional Oil Majors such as Exxon Mobil, Shell, Chevron, Total and BP over a two-year period. 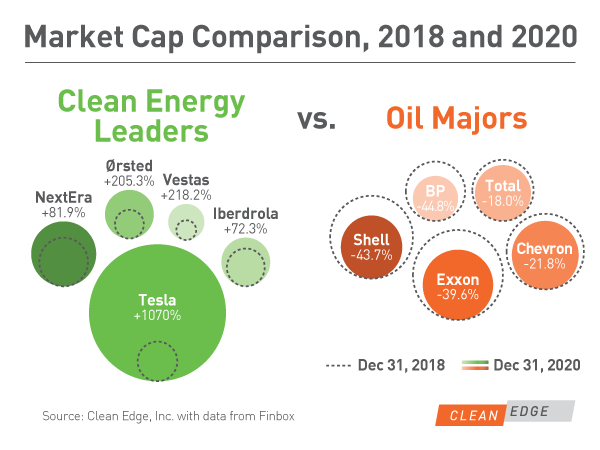 Below is a list of the top 10 best and worst constituent performers across all Clean Edge Nasdaq indexes (CELS, QGRD, HHO, and GWE) during both the entire year and in Q4. During 2020, two companies, Blink Charging Co, and Nio Inc, both increased more than 1,000% and five of the top 10 performers were comprised of EV and EV charging companies (Blink, Nio, Tesla, Workhorse, and BYD – although Workhorse was also the biggest loser in Q4, giving back 22% of its earlier gains).

QUARTERLY INSIGHT: RISE OF THE SPAC

Each quarter, we like to shine a light on a major trend. In this quarter we take a closer look at the rise of special purpose acquisition corporations (SPACs), which emerged as a fast-growing financing path for clean-tech companies (and many other sectors) in 2020. SPACs, also known as blank-check companies, offer firms an alternative to traditional IPOs (they’re already listed on a stock exchange and take companies public via acquisition or merger). As of late December, SPACs had raised nearly $80 billion in capital in 237 deals in 2020, a more than fourfold increase from 2019 and outpacing the $67 billion raised by traditional IPOs, according to Zacks Investment Research. About two dozen of the 2020 SPAC deals were in the clean energy and transportation sector.