The major news in the first quarter of 2022 was Russia’s unprovoked and vicious attack on the sovereign nation of Ukraine – making Vladimir Putin a global pariah (if he wasn’t already) and comedian turned-president Volodymyr Zelensky an accidental hero for inspiring and galvanizing the courage and strength of millions. The brutal and unsettling attack has also laid bare Europe’s reliance on Russian coal, oil, and natural gas, and has many nations scrambling to put an end to their dependency on volatile fossil fuels and Putin’s petrostate dictatorship once and for all.

While the markets continued to reward fossil fuels in Q1 (high prices and post-pandemic demand both fueled record profits for oil companies), there’s a growing and palpable sense that Putin’s War, rather than hindering the energy transition, will likely accelerate renewables and electrification efforts. As I outline below in my latest quarterly insight, there are signs of hope that after decades of Russian fossil fuel dependency, Europe is finally working overtime to release itself from Putin’s stranglehold. Indeed, moving from fossil fuels to renewables achieves two overarching goals of the continent: climate resiliency and energy independence.

Reflecting the unpredictability and volatility facing markets (including inflationary pressures and a meteoric rise in fossil fuel pricing) during Q1, CELS (U.S. clean energy) declined 4.89% and GWE (global wind) was down 2.03%. Infrastructure-focused QGRD (global smart grid & grid infrastructure) and HHO (U.S. water) declined 7.75% and 10.88% respectively. During the same timeframe, the S&P 500 declined 4.6% and IXE (Energy Select) was up 39.08% for the quarter. 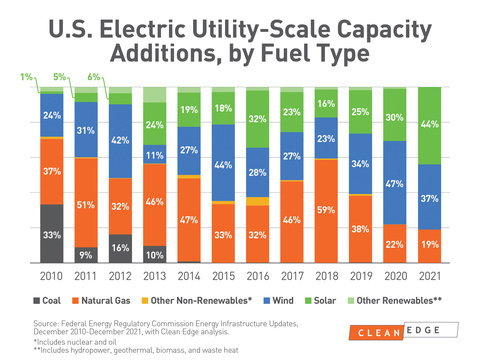 The war in Ukraine, and the massive devastation inflicted by Putin, have left me on edge; I’ve been constantly checking the latest developments and donating to causes that might be able to help, even a little bit, on the ground. Having to witness such barbarity harkens back to humanity’s deeper, darker side (and echoes of Hitler’s invasions), in stark contrast to an optimistic vision of an advanced, collaborative future. But out of crisis can come unexpected leadership and hope. The following recent developments give me just that: