Over the past year markets have exhibited remarkable resiliency, with 12-month returns up considerably from the lows of March 2020 (when the global pandemic first hit). Over the 12-month period tracked, Nasdaq Clean Edge thematic indexes benchmarking clean-energy sectors showed particular resilience, outperforming the S&P 500 and the IXE (Energy Select) indexes. The energy transition solidified during this period, with the International Renewable Energy Agency finding that in the midst of the economic turmoil caused by the global pandemic, the world added a record 260 gigawatts (GW) of renewable energy capacity in 2020 (up nearly 50% from 2019), representing more than 80% of all new electricity capacity added globally last year.

In the most recent quarter, however, IXE (with two fossil fuel holdings, Chevron and Exxon Mobil, making up more than 40% of its total weighting) outperformed the Nasdaq-Clean Edge indexes. This is likely due to a number of factors, including optimism for the prospect of broad economic reopening (including more air travel, car travel, and consumption), a rebound for IXE after declining more than 30% in 2020, and a correction from the massive build up in clean-energy stocks during 2020 and early 2021.

Reflecting the dramatic shift to solar and wind capacity additions in 2020 (highlighted in last month’s Data Dive and in the IRENA research discussed above), a record six states derived more than 30% of their in-state electricity generation from renewable energy sources (solar, wind, and geothermal): Iowa, Kansas, Oklahoma, and the Dakotas (all from wind power), and California, where solar contributed 23% of the state's total in-state generation. Iowa’s 57.3% from wind was a historic milestone: 2020 marked the first year that any state generated more than half of its electricity from renewable sources other than hydro. 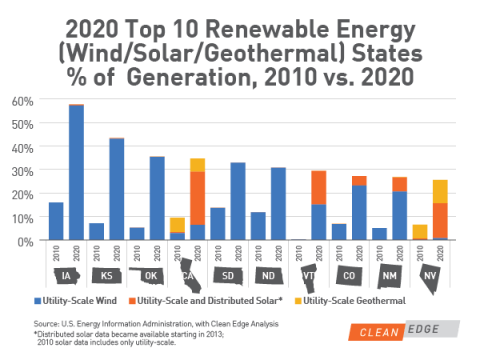 Among the top 10 states in 2020, five were red states (IA, KS, OK, SD, and ND) and five were blue (CA, CO, NM, NV, and VT), based on the latest election cycle. This even split reflects broad support for clean energy across the U.S. political spectrum, at least at the state level, making clean-energy deployment perhaps one of the least polarizing issues in an oft-divided nation.

QUARTERLY INSIGHT: FROZEN GRIDS AND THE FUTURE OF INFRASTRUCTURE

When energy historians look back at the first quarter of 2021, the event that will likely be most chronicled and examined is the massive meltdown of the Texas power grid which resulted in the death of dozens of people and cost stakeholders billions of dollars in unexpected energy costs. While some initially tried to blame wind power on the grid’s massive failure, such erroneous claims were quickly refuted, and it became clear that the Texas grid failed in the face of a dramatic (but predictable) climactic event which froze natural gas lines and power plants (notably natural gas and even nuclear power plants) that had not been appropriately weatherized. It didn't help that the Texas grid system (unlike any other in the nation) operates as a distinct island – unable to tap excess resources from neighboring grid operators during a time of stress. There are a host of lessons that will emerge from Texas’s grid failure, but one thing is clear, we need a modern, 21st century grid infrastructure that can withstand increasingly challenging climactic events, whether extreme cold, heat waves, or wildfires.

Add in the urgency to decarbonize energy use across the built environment, transportation, and industry, and the need for resilient infrastructure has never been more pressing. As a society, we must think of infrastructure in broad terms beyond the usual suspects of “roads and bridges.” Any 21st century view of infrastructure should include such areas as the electrification of transportation (including charging networks); broadband networks; grid transmission and distribution networks; utility-scale and distributed energy storage; agriculture; and water filtration and wastewater management networks. The leadership of both blue and red states in clean-energy generation, as highlighted above, along with growing public and corporate support for clean-tech innovation, raises hope that the nation’s much-needed infrastructure overhaul (via a range of potential avenues) might finally be within reach.