This year's report is the 12th annual edition in Clean Edge's Clean Energy Trends report series. From tracking, forecasting, and market sizing the global solar, wind, and biofuels markets, to detailed analysis of solar PV pricing, the public markets, and venture capital investments, this report series has become the signature report in the clean-energy economy. This year's report also outlines five key trends that will impact clean-energy markets in the coming years:

The following is an excerpt from Clean Energy Trends 2013.

2012 proved to be an unsettling and difficult year for clean energy. High-profile bankruptcies and layoffs plagued many clean-tech companies, overall venture investments retreated in the face of increasingly elusive returns, and the industry was begrudgingly transformed into a partisan wedge issue during the highly contentious U.S. presidential campaign.

The beginning of 2013 has continued many of these same themes. In the U.S., conservative organizations and politicians continue to attack pro-clean energy policies at both the state and federal level. Numerous groups, most prominently the American Legislative Exchange Council (ALEC), are feeding off election-season rhetoric by ratcheting up efforts to roll back supportive policies such as state-backed renewable portfolio standards (RPS). In Europe, ongoing economic struggles continue to slow demand for a host of clean technologies. Even in China, where economic growth and clean-tech commitments seem to carry on unimpeded, the country’s overleveraged solar manufacturers are being forced to crawl back to the government for even larger (and we’d say unsustainable) safety nets.

The fundamental global market drivers for clean technology, however, remain largely intact. Intensifying resource constraints (everything from freshwater to energy feedstocks) cannot be ignored, especially with a global population now exceeding 7 billion. In the aftermath of unprecedented climate disruption in the U.S. and abroad, resiliency and adaptation are becoming critical business and policy drivers as organizations scramble to meet a literally changing landscape. In the U.S., President Obama has signaled a strong commitment to expanding clean energy and energy efficiency in his second term, calling for a doubling of renewable power by 2020. And increasingly lower prices for clean-tech goods and services are helping wind and solar power reach cost parity in both utility-scale and distributed markets, making the value proposition increasingly attractive. Even amidst the carnage of 2012, clean energy has continued its ascent as a major economic force, with an increasing focus on deploying technologies that are ready and available now 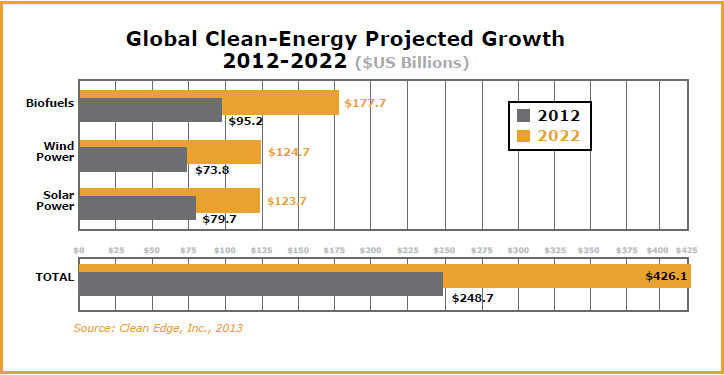 According to our research:

In 2012, U.S.-based venture capital investments in clean technologies totaled $5.0 billion, contracting for the first time in three years with a 26 percent drop from $6.6 billion in 2011, according to data provided by Cleantech Group.

Clean tech’s decline, however, matched a similar downward trend for total VC investment in the U.S., with clean-tech investments still representing nearly one-fifth of all VC activity in the U.S. during 2012.