The transformation of the electric grid in the United States continues to proceed at an unprecedented rate. The proliferation of advanced metering infrastructure (AMI), utility-scale renewable generation, distributed energy resources (DERs), energy storage, electric vehicles, and other technologies is changing the way electric power is transmitted, distributed, and managed, in both large and small ways. These changes affect the full range of grid stakeholders – utilities, regulators, policymakers, grid operators, electric service providers, and customers.

Published by the GridWise Alliance in collaboration with Clean Edge, the 3rd Annual Grid Modernization Index (GMI) ranks and assesses all 50 states and Washington DC, based upon the degree to which they have moved toward a modernized electric “Grid of the Future.”

For the third time in a row, California is the highest-ranked state, with a score of 88, more than six points higher than its score in 2014. The state ranks first in the Customer Engagement category (as it did in the previous GMI), and second in both State Support and Grid Operations. California has a nearly seven-point lead over second-place Illinois, while Texas (which was neck and neck with California for the top score in the previous GMI) ranks third. Maryland and Delaware each move up a spot to fourth and fifth respectively. Rounding out the top ten are Washington DC, Oregon, Arizona, Pennsylvania, and Georgia. 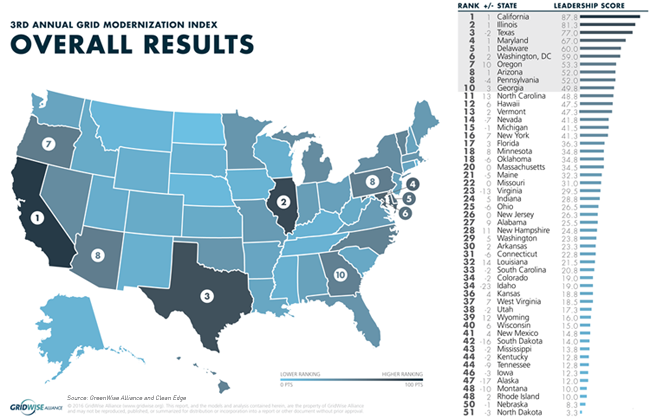 How the GMI is Calculated 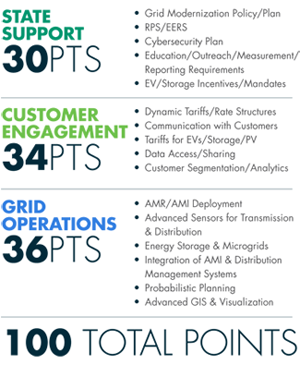 The GMI ranking system uses a clearly defined set of criteria to evaluate and convey the progress and and impacts of this transformative set of improvements to the states' electricity infrastructure.

• STATE SUPPORT, which is based on plans and policies that support grid modernization

• GRID OPERATIONS, which benchmarks the deployment of grid modernization technologies such as sensors and smart meters.

Based on survey data collected in June-October 2015, the 3rd Annual GMI benchmarks states on a wide range of grid modernization policies, investments, and activities. To carry out the data collection effort, the GridWise Alliance assembled a project team of a wide variety of individuals from utilities, industry leaders, consultants, and non-profit groups who gathered data through phone interviews, e-mail surveys, and other sources.

Report Published in Collaboration with: