The San Diego region has become a clean-tech marketplace leader, now ranked fourth in our 2015 U.S. Clean Tech Leadership Index. This may come as no surprise, given its location in one of the most environmentally progressive states in the nation, its strong regional economy, and abundant solar energy potential. Harnessing all these advantages, though, has required initiative and investment by citizens, businesses, and political leaders throughout the region.

This briefing delves into the details of the San Diego region’s clean-tech sector, illustrating key trends and highlighting successes and opportunities in the region. It looks at green buildings, advanced transportation, clean electricity, and investment and innovation, as well as the leading policy factors impacting these markets. In addition to the comparative datasets for San Diego’s performance, the publication highlights key takeaways for the region. 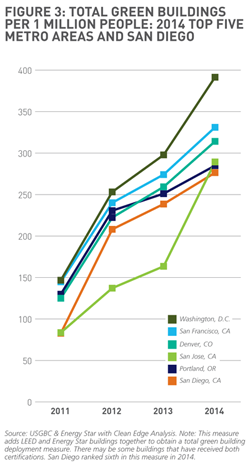 With the Generous Support of: